Whose idea it was to start early and go to the start line?

Okay, mine. I was accompanied by Christael to the start line of the Elite Women’s Race, we were both very nervous for the women lining up, we had spent time with Orica-AIS women Amanda Spratt and Gracie Elvin the day before and we could tell they were full of anticipation as much as were.

The rest of our Strongher crew joined us at a more civilised hour and we hung out on the Nationals course, some of heading up to the KOM climb to cheer the women on as the battled it up for the 9th time with 1 more lap to go. Having friends in the race made it extra special. We headed back to the start line pretty quickly, we had high hopes for Orica-AIS today and to see Amanda Spratt cross the line in first position after sprinting past second place getter Ruth Corset and then third place to Rachael Neylan was an absolute highlight and inspiration for us; as we were about to begin our journey to Adelaide.

Lunch was next, followed by a few photo opportunities and we were off!

No, not racing, it was hot, we headed off after 1:30pm and it didn’t get any cooler, we also didn’t get a tail wind, we had headwinds and cross winds.

Loes guided us through positioning ourselves so that we could help each other out and protect each other as much as possible. However, the heat got to Helen and Penny, they battled on hard through the early parts of the ride but our trip to Adelaide is long and it was important that everyone was confident with sitting in the bus when they needed it knowing that there were more long days to come.

Then there were five

We were amused by the popping of the bitumen, if that isn’t an indication of how hot it is I’m not sure what is! We tried to sing some songs and we tried to play eye-spey but our understanding of each other’s accents in the wind needs improvement to get the letter right.

The sign pointing us to Ararat with 20km to go had me and Conchita comparing it to a favourite Time Trial course at Champion Lakes in Perth. With 15km to go I new it was only a bit more than a commute home, so we soldiered and pretended that we were on our final lap of the Women’s Elite Race, Loes ended up taking the sprint her experience and ability to suffer exceed ours.

We arrived at or hotel spent, there’s not another word for it!

Having to be encouraged to shower is a unique experience, having my bike taken of me so I could have a soft drink was amazing.
We’re starting to get to know each other, our strength, weaknesses and personalities are all bound to shine on this journey.
An awesome crew to ride with, our riders are Penny, Helen, Sara, Conchita, Christael, myself and our leader Loes ☺

Today was a really good ride!

After we had recovered from the hot day yesterday, today was a really good ride. We left early so temperatures wouldn’t get too high for us again. Highlight of the day was the 9km climb through the popular Grampians National park.

Grampians National park is a famous spot for tourists to visit

Having the opportunity to ride here by bike makes it extra special. After a coffee in Hall Gap we felt prepared to take on this climb before the heat would strike again. The views were spectacular and everybody did really well! We loaded some sugar at the top and got ready for an even more spectacular descent! Unfortunately, we got held up by a car, but that didn’t make it less fun.

The rest of the ride to Horsham was flat and added up to 125km. Tomorrow will be one of our longest rides during this road trip with 148km. Hopefully the weather will be with us! Stay tuned… There will be more to come!!

Wise heads dediced an early start! Roadset just after 6:30 in the cool morning. ‘What Bliss’..

We motored along like a well oiled ‘chain-gang’. Through wheat & sheep country! Flat, long straight roads, lined with trees. Big paddocks with newly baked holden hay, some had a bale missing at the top and one wag suggested the nice hadgot to the stack.

Lots of white cockatoo’s screeched at is at intervals every 15 minutes or so to wake us up. Beautiful parrots, gallaks, and kangaroos again! Plus emus.

Today was a very happy day

Lots of singing and joking, baby sprints into town and everybody was laughing; mainly at Loes, who just wouldn’t be beaten. She’s such a great character to ride with.

Then it only got warmer in the bery last hour + only to about early 30degrees, still we laughed. 151km exactly to the hotel with an average of 28km/u. Fabulous ride ☺

We were all a bit apprehensive about today! It was going to be the longest day of our trip. This wasn’t helped by Loes “adjusting” its length throughout the day, so that in the end we did an extra 20km than first planned. Lucky she has such a lovely smile!

But we did it!

We rode 178km, most of which was into a block headwind. When we didn’t have it coming straight on it was coming across our shoulder, but this gave us a great opportunity to learn from Loes as to how to form and ride in an echelon.

It was a long day, but it was made enjoyable by seeing Helen ride on the front for 12km into a raging headwind, being inspired by Loes’ outstanding riding on the front, riding through the famous Coorong and having the wonderful staff always there to fill up our water bottles and tend to our fragile egos.

“Dear Loes, apparently yesterday we passed a lobster. I have no recollection of this marvelous creature and would like to revisit it. I understand that it’s a few kilometers back but with your fluidity with numbers we will be back there in no time. Regards Chita.”

Today we left Salt Creek on our way to Victor Harbour. Yesterday was a tough day on the bike. (See note above). Today we were suprised that for the first time our kilometers were reduced. Flexibility! Loes lead us out of the Salt Creek Road House and taught us the finer details of diagonal echelon formation.

Armed with this knowledge we tore up the highway,

wildlife scattering as we went. 37kms later with a decent average we had our first stop. The team split with half shuttled on the support bus to Victor Harbour, and the rest with Loes to be picked up later on up the road. Arriving at Victor Harbor. it was good to see the ocean.

The wind was favourable,

and great speed was made by those left with an added extra of a small ferry ride. The team reunited at the motel once again. Tomorrow is another day with our final run to Adelaide. All in.

There’s not a lot to say about the final day, we just had to get it done, the awful climb that was 14% at one point when Sarah looked down was most unexpected, sweat dripping onto our garmins and Rowena hoped that her chain would break for an easy way out. We reached the city limits and encountered more traffic than we’d seen in the last 6 days. We reached the hotel and got told that there were another few km’s to the beach, nobody stopped their garmins, Loes had told us that Chamois time was training time! To the beach we went… For champagne and celebrations.

We wanted to say the following from each rider:

Helen Horsburgh (Queen Bee): “What a challenge! I did it! Age isn’t a barrier. What a week! Thanks girls!”

Sarah Hazell: “I think it was great to bookend the trip with Nathan Haas, to prove that we were crazy to ride from Ballarat to Adelaide.” 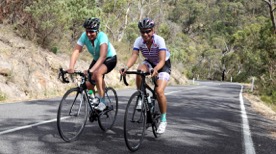 Conchita Brodalka: “I’ve never laughed so much and been in so much pain at the same time. It was such a fantastic bunch of ladies!”

Rowena Scott: “I’ve never pissed behind so many bushes in my life and I’m waiting for the email about the next adventure from #Strongher”

Christel van Loo (right, Loes Gunnewijk: left): “A week of living the dream! Thanks Strongher for an amazing cycling adventure” ☺

/%postname%/
#
Sort Gallery
https://loesgunnewijk.nl/wp-content/themes/blake
on
no
off
off
Enter your email here
on
off